Brought to you by The Goliath Corporation

Cloning your dodo should be fairly easy - there's a bit of sewing, but it's all quite simple. Each one takes me about 4 hours to make, but that will depend on how fast you sew. It's a good idea to read through the whole instructional before you start to sew to ensure you know what the end idea is, and understand the concept of how each bit fits together to prevent mistakes. Of course feel free to adapt at will - if you want a dodo with 18 wings and 5 feet, who am I to stop you? You can also leave comments or chuck me emails if you have questions

You will need:
* Socks - one pair of grey (or body colour of your choice), one pair yellow/orange (or whatever beak & feet colour you want). If you picked up one of my 'Clone Your Own Dodo' packs you'll have one yellow knee sock instead of a pair - they're bigger, so you only need one. A few notes on socks if you're buying your own: think about the texture - you can get all sorts of interesting knits but the woollier your sock the quicker the weave will unravel once you cut into it so the faster you'll need to sew; size matters too, baby socks will give you a cute baby dodo, but be fiddly to work with. I would recommend not buying really cheap socks, as the material tends to be thin (meaning once you stuff it, the stuffing shows through, particularly important here where you're using dark coloured grey socks), and quite often the toe structure will be wonky, which will mess up dodo's body shape.
* Stuffing. You can buy Toy stuffing in bags from most haberdashery stores (or here at Sew & So - the best price v's quality trade off I've found so far), or buy pillows/cushions and gut them. Don't use old pillows coz the stuffing will be lumpy.
* A Trick marker pen or Dress-makers chalk
* Scissors.
* Pins - optional - for if you find it easier to pin before you sew, though I never bother.
* Buttons or googly eyes. A pair of 'em. Again a matter of taste as to size, colour etc...
* Needles (or a sewing machine) & thread. I sew my sockies by hand, as I like my craft projects to be portable, but there's no reason you couldn't use a machine if you prefer.
* Thick paper (or thin card. whatever) to make templates from -  I use bits of magazine cover. if you've got a 'Clone Your own' pack, you may find it easier to back the templates with thicker paper. If you don't have a pack, simply make your own templates, following the shapes on the templates image below.
Right... set and ready to go? good
Body & Tail
One of the best things about making a dodo is that you do the body & tail first, meaning you really quickly feel like you're making good progress - hurrah for morale boosting easy starts! 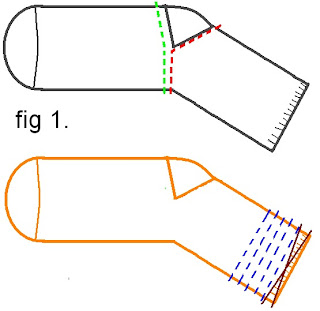 Lay one of your grey socks out on it's side, and cut through both layers along the red line shown in Fig 1. You're basically removing the ankle and cuff section from the heel, foot & toe. Then take your orange sock; cut off & discard the cuff section. Cut 4 or 5 strips about a centimetre thick (as shown by the blue lines in Fig 1. you're really appreciating my skills in Paint now, aren't you?), and put them to one side for a minute. The grey toe and foot section is going to form the body of your bird (the heel will be the tail, along with your orange strips) - and you're already good to stuff it. See what I mean about quick progress? You may want to experiment a little with density & shaping, the finished effect is basically dependant on what you do here here so play around until your happy. 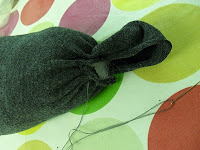 Once you're good to go, sew running stitch (fairly large) where the green line is in fig 1 (imagine that line going all the way around your sock) - don't tie it off yet, pull the thread tight to ruche up the fabric until you've NEARLY closed the tail section off - pop in the ends of the orange strips you cut earlier, so that most of the length sits outside as the tail, with a kind of grey hood formed from the heel of your body piece. Tighten the running stitch and tie it off, then further secure your tail feathers with ladder stitch. Cut the grey heel-hood into strips (be careful not to cut to far, stop just before the line of running stitch). Don't worry if the lengths look a bit odd right now, that's one of the details it's best to leave to finalise at the tail end (Boom boom) of the project. 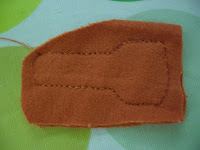 Beak
Turn what remains of your orange sock inside out, lay it out neatly on a flat surface and draw around your beak template with trick-marker or chalk (use the rest of the ankle section if there's space, otherwise use the foot section). Sew through both layers of sock using backstitch - leaving the dotted line section unsewn for stuffing. Cut out your beak, leaving 3-4mm seam allowance all the way around, and turn right way out. Personally, I prefer to stuff the beak quite lightly, but that's a matter of taste, and the important thing is to create a distinct shape with a bobble at the end. once stuffed you should find that one lip has a slight overhang at the seam- that's the upper beak. 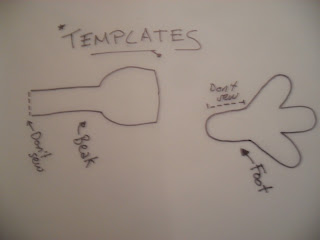 Head
Take the grey ankle piece you cut off earlier, remove & discard the cuff. Cut about 2/3rd (that should be around 2 inches, maybe a little more. If in doubt, take more than you think you need as you can always trim down later) off, and turn that section inside out. Sew a line of running stitch around one end (leaving about 3mm seam allowance) and pull tight, in the same way as you did for the tail (but pull all the way closed this time) and tie off. 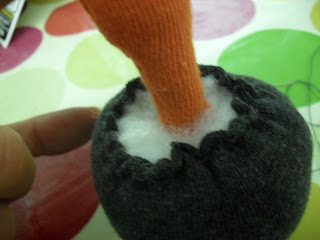 Turn the whole thing right way in again, so that the seam allowance on the joint you just made is on the inside. Roll some of your stuffing into a head-sized ball (sorry. I can't think of anything the right size to compare it to... I have a cold and my head is full of fog so I'm not too hot on the ol' writing skills today. to be honest, I never am really. Why are you reading this? Bigger than a ping pong ball, smaller than a tennis ball. I don't know of any sport that entails appropriate sized equipment - I can think of a couple of other activities that might, though). Follow the same process again, sewing a line of running stitch around the open end of the head, but, like on the tail, don't pull all the way tight. Insert the open end of the beak into the opening and close up the gap as much as possible, then secure with an extra row of running stitch, this time going through both the grey & orange sock. The seam allowance of the grey sock should be allowed to sit outside the head, creating a kind of feathery, broken line effect where the joint to the beak sits. Your Dodo's head is finished, aside from attaching eyes, which I always leave til the end as it's so important for giving your sockie expression I prefer to do it once all the other pieces are in place, that way I can play with positioning and decide how they look best in full context. 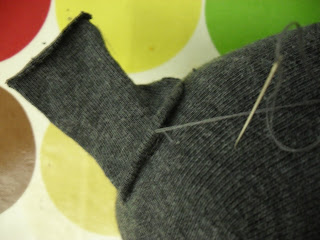 Neck
Take your remaining grey sock, and cut from the ankle section a rectangle about 1 1/2 inch by 2 1/4 inch. Fold in half along it's length, keeping the right side in. Sew the short edges to each other using over stitch, to create a short narrow cylinder of sock. Turn the right way out, and sit one of the open ends onto your dodo body (turning in a small seam allowance). You may want to pin or tack the neck on first to ensure an even circular shape, once your happy secure with ladder stitch. It's a good idea to stuff the neck quite firmly to ensure it doesn't bend under the weight of the head. Then simply repeat the process of pinning & ladder stitch to attach the neck to the head (consider what angle you want the head to sit at, and keep the head the orientated so the beak sits the right way up & faces forward). 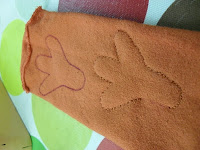 Feet
Right. Grab your remaining orange sock (or sock bit) and turn inside out. Take your foot template and draw around it in (trick-marker or chalk) twice. Sew around them in backstitch (leaving the instep open as indicated by the dotted line, for turning out & stuffing), and cut out leaving 3-4 mm seam allowance (you may need to leave slightly less between the toes). 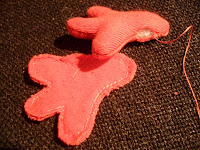 Then simply turn right way out (here's where your pokey thing  comes into play, getting into the toes), stuff (play with how densely you want to stuff it - different amounts may alter the shape of your feet) and sew up the instep with slip stitch. Position them as required on the base of your dodo and attach with ladder stitch 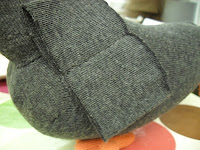 Wings
Take what remain of your second grey sock, and cut off the heel/ankle section and the toe, basically leaving yourself a grey tube of foot section. Chop that in half to make two shorter tubes, and lay one half out flat, at an angle, on the dodo body, like in the picture (I'm struggling to describe this in words. Damn head cold!). Sew a line of backstitch through both layers of wing and onto the body, about 2/5ths of the way down the wing. 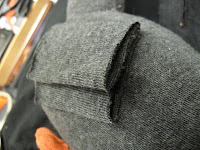 Fold the top 2/5ths over the top of the bottom section, thus hiding your stitches and creating a two layer wing effect. Slice up into the wing to create 4 or 5 slices (don't go all the way to the top). This should leave you with a number of loops, which, if you tug on slightly (go easy here at first - you can always pull a little harder if you choose), will stand out from the body more. 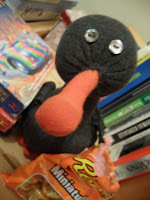 Final Touches
You are basically done now - just a couple of details to attend to. First off, and entirely optional, you may want to trim the tail a little to shape it (if you leave them long & tug on each strand, they will curl. Purtty!). Then position & sew on the eyes (for people used to sewing buttons on clothes, it's best NOT to use the shank method here, as the eyes will flop around if you do, so just use normal button stitch).
Et voila! You're done!
I suggest you now move to Swindon & join SpecOps (division of your choice. personally I've opted for 24. I'm all about the art crime since someone stole WarHorse & sold it to Spielberg. Bastards.)

Nxx
PS. totally not official or in anyway endorsed by Mr.Fforde. Though he did name check me in his blog (did I mention that already? oh)
PPS. Now totally endorsed by Fforde (see comments below) rock on mo-fo
Posted by Noodle at 2:13 am